Disclaimer here:  Use of a cervical traction unit for certain conditions can be dangerous.  With any regimen, use should be reasonable and conservative.  Most studies we’ve seen indicate using no more than 10% of your body weight for traction, and to gradually apply traction over time to reach that value.

These different methods of traction are as varied as the engineers that designed them.  It’s also my experience that there is a proportionality between price, and ease of use.  Since ease of use usually correlates with actually USING it, typically paying for the machine is a good idea.  (With one exception)

So without further ado, let’s begin:

So let’s start with the most expensive of them, the Saunders Cervical Home Trac. : 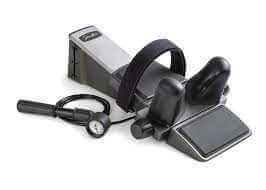 The HomeTrac is a beautifully elegant machine, with great tooling, a satisfying weight, and a precise control of the amount of traction.

It comes at a price, though, about 400US.  So, if you don’t care about money, get this one.  It’s compact enough to fit under the bed, and it’s easy to set up.

The next up is the ProNex.  It’s essentially a bellows, that stretches the neck, but also does extension at the same time.  It’s pretty perfect, for what we’re looking for in a traction unit.  The problem?  It’s a piece of crap quality-wise.  It’s a plastic nothing, and with one puncture or crack, it’s rendered into a more worthless piece of plastic.  At 300US, it’s more expensive than it deserves. 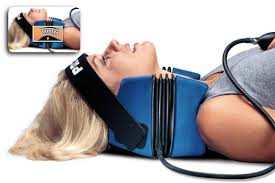 Overdoor traction unit.  There are a lot of manufacturers of these, and essentially they are what they look like in this picture:  a bracket on the door, and two pulleys, a rope, a harness for the head, and then a very sexy bag of water. 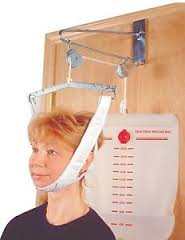 It’s not that sexy.  And, it has the chance to be very wet.  It means you’re sitting next to a door.  Plain ans simple, it’s a pain in the butt, but… These typically cost about 20 bucks.

There’s also the inflatable ring traction:  It’s probably genius, as you can wear it anywhere, and it’s easy to control the amount of traction, easy to remove… but I’m not sure how well it does this.. none of our patients have yet to leap on this concept.

The inflatable ring… anyone want to look like they belong in some crazy African tribe?

We’ve sold the Pettibon overdoor traction unit, as seen in the picture, and on our Youtube video.  It’s about as lowtech as you can get, essentially a rope with two pieces of  foam colored PVC pipe, that allow the extension and force traction, as well.  At 60US, it’s definitely got a huge markup in price.   It’s effective, though, even if there is no precise control of the amount of traction you are putting into your spine. 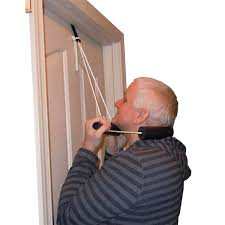 Well, you’ve made it this far, so you deserve to hear what the best value is for cervical traction units.

The NECKPRO traction unit is easily the best value in the group.  It’s small, it’s precise, it’s easy to use, and it’s cheap.  At 60US, it’s not terrifically expensive, and its well made. It’s not ugly, it’s packable, and it’s the traction unit of choice for the value-conscious patient. 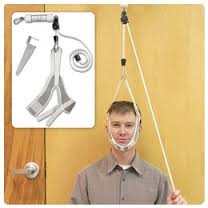 NECKPRO- Dr. Carr likes this one the best (2016) until something comes up to unseat it as the best.